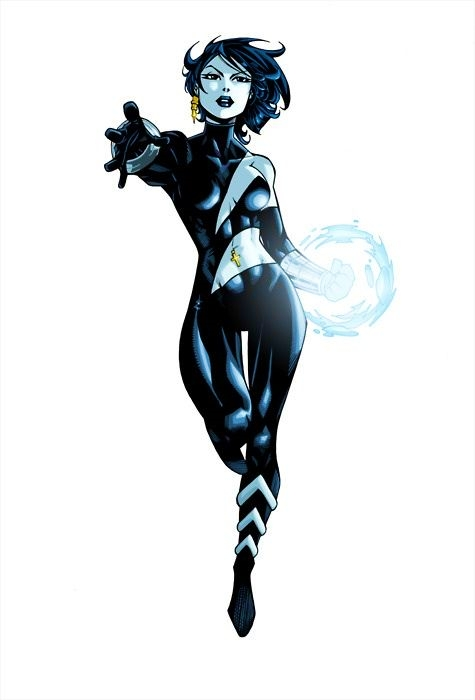 Personality:
Argent is a fairly quiet woman who prefers to keep to herself. While she is not unfriendly, she does prefer not to be around most people. This is mostly born from a rather deep-seated insecurity with herself and fear that she might be shunned once they've learned of her true purpose. There is a deep loneliness in her, and a conscious desire to want to get close to people even with the risk.

She hardly even takes her role as a hero seriously, and as such does as she pleases making it seem more like a hobby than anything she really cares about. She does have her honor however, and she'll fight just as hard as anyone else when pushed but she displays a rather laid back, and surly attitude. She does display the drive to be a better hero, but she's fallen into habit.

Get to know her however and she's actually a fairly romantic, bright, happy, perky, wise-cracking, charming and friendly girl. She has her own problems as she's learning how to move on from being a spoiled rich girl, but lord knows who she'll be if she can ever drop her baggage.

Interestingly despite her appearance and attire she is not a goth and really seems to be a party girl, hell one of her biggest dreams is to become a model....but she's got learning to do before then.

History:
Daughter of a very wealthy former U.S. Senator from New Jersey Toni grew up your stereotypical, sheltered, wealthy girl with more interest in shopping, music, and her looks than anything else. Her family was never close, but she seemed fine going through life hugging her silver spoon and enjoying the typical activities.

Around the time she turned sixteen, Toni's skin gained a silver sheen to it. At a pool party for her sixteenth birthday, Toni was mysteriously teleported away. Toni, along with a few other teens, learned that they were half-alien, and their mothers were impregnated by an alien race called the H'San Natall years ago. The H'san Natall were known for impregnating alien women a conqueror race that even Darkseid avoided. The teens were part of a sleeper agent program created by the H'San Natall to defeat the super-powered beings already on Earth. She was devastated to learn this, but resolved not to be a pawn to their schemes and with the help of a de-aged Ray Palmer they were able to avoid conditioning. They worked together in order to get back to Earth, slowly awakening more and more of their power as they did.

The group of teenagers escaped the aliens and returned to earth, where they found safe haven with the extremely wealthy Loren Jupiter and his enigmatic associate, Omen. Loren decided to keep tabs on the teenagers knowing that they might still fall into the hands of the H'San Natall, but needed help in honing their abilities. He agreed to shelter and watch them for a time, even helpng them attain their costumes. Toni was given the codename Argent because of the silver energy she produced, but the nature caused Loren to contact The Guardians and the Corps.

This is when she was met with the Green Lantern Hal Jordan, but they only figured out that her abilities were somewhat similar to a ring except produced by her mind and body as opposed to a weapon...and they were still growing. The group of half-aliens were dubbed "The Children of Titan" and were quickly drawn into conflict with the H'San Natall, The Veil, and other alien threats. Believing that they were safe and could be trusted Loren, Hal, and Palmer managed to get the team referred to Xavier's School to allow her and the other heroes a chance to learn in a safe environment with others like them and keep hold of their humanity in the event the H'San Natall struck again.

Argent's father was unsure, but wanting to hopefully allow Toni to get back to her normal nature he agreed and she herself knew she needed to train. She never quite believed in heroes, but her world was what it was and so it proved to be the best option.

Powers/Skills:
Silver Plasma Energy Constructs: Argent can generate solid energy constructs out of the element of plasma in simple forms such as protective shields, ropes, daggers, and battering rams. While she can not fly, she can create slides and flying platforms to carry herself and others through the air. Her silver-colored plasma energy is said to be of a similar wavelength to the green plasma energies of a Green Lantern's ring and can have any degree of tangibility.

Force Field: Another application of Argent's silver plasma generation is that she can create solid shields, barriers and force-fields that she can project over herself or others.

Psychic Link: Argent is capable of forming a physchic bond with people allowing her to understand their emotional states, trauma, and determine their locations within a certain range though this extends the closer she is with them.