But, ok, sure. I'm the high risk person to worry about.
Click to expand...

You are a glitch in the matrix! The bureaucracy doesn't know what to do with your gweilo documents.

After spending $100 on 'ubers' last week, I braved public transportation, today. While basically everything is open (even bars, I've heard), passengers were still less than half of normal. Awesome. No getting rudely shoved, and only thousands of people had to die to achieve that.

Someone got on the bus and had a temp wand that they waved around. So, everything is slow as hell at the main stop with each bus waiting in line for that. They also dropped us off on a bridge, which was fun because Chinese drivers are inherently considerate, especially when pedestrians find themselves in the middle of the road.

While traveling, I saw a bunch of Tweets comparing the US response to China's current response. I satisfied my inner educated debater and copypasted to all of them a reminder that China punished the doctors who first noticed it in December, and that both gov'ts can be simultaneously and independently shitty. China doesn't deserve a kudos for not enforcing meat laws, punishing the first alerters, and then having a big endeavor for which totalitarianism is useful.

Offices here have the no handshake implemented and schools are now doing the virtual classes now. I hope this is not going to be our new normal. Wearing a charcoal mask and not being able to hug people anymore or human contact or cautious if you have wiped down the shopping cart or have you sanitized your hand before touching your face etc.

Wouldn't have been necessary if they had, say, shut down all international travel back in mid-February when cases were starting to pour out of Iran. But I guess it's a bit like standing up to Hitler in 1938: would have taken more balls and clear-headedness than is typically permitted for people in the decision-making class. And maybe they're secretly hoping this virus will wipe out a large chunk of boomers, and with them all the pensions and other benefits owed to them that no first world country can possibly pay out in full without massive borrowing or inflation.

President Trump Addresses the Nation on the Coronavirus Outbreak

President Trump addresses the nation from the Oval Office on the coronavirus outbreak.

LIVE: Trump will address America about the Coronavirus situation

Now that it's no longer a conspiracy theory: 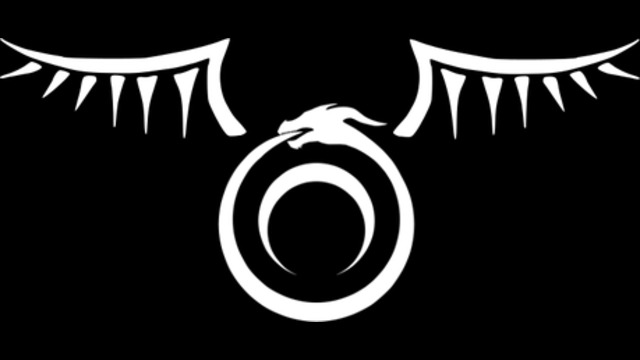 Here's an article on different strategies countries can take to manage the pandemic, with estimates of cost and effectiveness. Bottom line, the best option is called Hammer-and-Dance: strong suppression in the short term, for about 3-7 weeks, then a long period of carefully managing the situation, adding or removing restrictions in response to case flare-ups or lulls over the next 18 months or so until a vaccine can be developed. 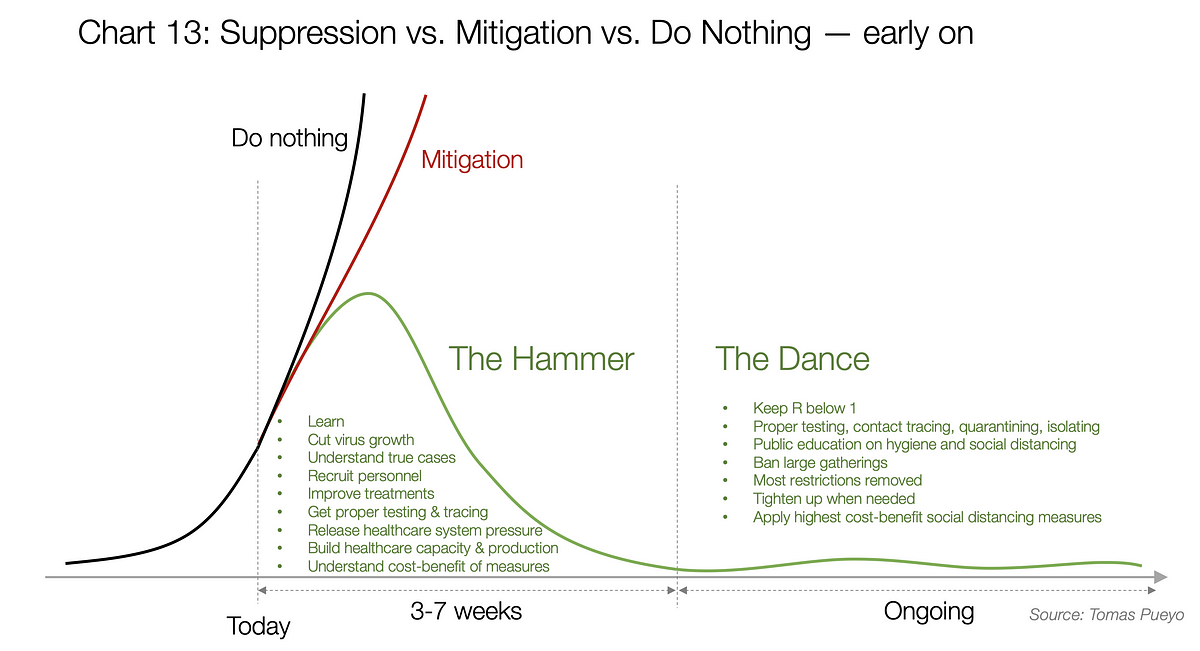 Coronavirus: The Hammer and the Dance

What the Next 18 Months Can Look Like, if Leaders Buy Us Time 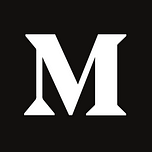 According to the numbers here, the best benefit-to-cost ratio comes from testing and contact tracing (as Korea did), and general education about washing hands and so forth. Closures of large gatherings, bars, schools, and businesses all provide increased benefit but at much higher cost. Things like spraying disinfectant everywhere provide very little benefit, at high cost. The goal is to select the right combination of measures to stack up just enough gains to get the R0 value from its default of 2.5, down below 1, to prevent exponential case growth and thus keep the hospitals operational for the long term, until a vaccine is available.

Looking at this objectively, after all the evil suppression by the CPC, once the containment started, 2 weeks of closures with some other rolling closures (dance clubs opened after most other things and everyone has to wear a mask (fun!)) really seemed to work over here. It sucks. Y'all are going through what I went through in Jan/Feb. But it worked. It's a 2-3 week-long ripping off of the bandaid. It sucks, but deal with it over the short term or there will be lingering unforeseen consequences over the long term.

Good read about how it's incredibly unlikely the virus was engineered:

The coronavirus did not escape from a lab. Here's how we know. | Live Science

A persistent coronavirus myth that this virus, called SARS-CoV-2, was made by scientists and escaped from a lab in Wuhan is completely unfounded. Here's how we know.
www.livescience.com

And there are currently propaganda posters about not eating pangolins in the Shanghai subway. 20 years late, since they were a likely vector of SARS. But... China.

7-12 million cell phones have disconnected from the three major Chinese telecom companies in the past few months. One theory says that’s more reflective of the number of people who died there, that their government is being dishonest about. Another is that that could be a combination of people who died, as well as dissidents against the government who are being silenced.

Either way, the Chinese government dislikes its incompetence or even reasonable flaws being uncovered so they lie and it usually makes the original problem worse.

21 million. Mostly migrant workers not going back to work. You need to buy phone plans by province here.

I had heard that story a few days ago when styx mentioned it, and I was wondering what was the cause of it. Thanks. I suppose if it were deaths causing it, you'd see them all clustered in Wuhan.

Yeah. Random facts from China can't be interpreted correctly without understanding just how different systems here are. It wasn't quite a no-brainer for me, but I Googled until I found something credible, and well, yeah. That makes sense. After 5 years, I know so few local Shanghainese. Everyone goes to bigger cities for work. That this started (was publicly acknowledged) just before the biggest migration in human history, there were bound to be a lot of peripheral things going on. In an epidemic, LA can't pay rent, and Chinese end their phone plans in provinces they're not living in, anymore.

*Having a plan in another province is basically like roaming. There's a lot of province-specific businessy things. Even though my bank up in Shandong has branches in Shanghai, it was like I wasn't a customer here, so I just got a new bank after I moved. 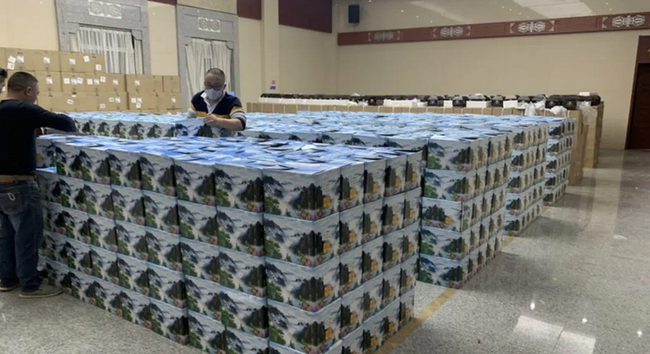 "Urns are reportedly being distributed at a rate of 500 a day..."

More possible evidence that the Chinese government is being dishonest

I was waiting for this. I'd be surprised if the majority of people believed China's numbers. Even here, most Chinese people I talked to about it doubted the official numbers. The only facts in international news were "China said #", there was no way for anyone to confirm or prove wrong at the time. The videos of people in Wuhan saying it was much worse were there since the beginning. The nurse claiming that they were stacking bodies in the hallways was possibly true, but that wouldn't help with estimates, and Italy basically did the same thing.

I checked ZeroHedge's citations, and they're credible.

However, a note on the bias of ZH. The Shanghaiist's headline implies that all the urns were from corona virus victims. That is not the case, as clearly indicated by reference Caixin. The Shanghaiist basically wrote their own article in English from the Caixin article and left out the part where these urns are from everyone who died over the last couple months, regardless of reason. (I expect it'll be taken down because of the implicatinon.) Everything in Wuhan was shut down, and the funeral homes were not operating. They interviewed a woman who waited to pick up her father who died of brain cancer. Wuhan has 11 million people, and the bodies (from every reason) were piling up.

Caixin is a mainstream financial and investigative media outlet. They've been censored for publishing articles relating to Western values such as freedom of speech. Their article, while it lists estimates of totals of urns being delivered, they clearly stated it was from a backlog of everyone who died during the lockdown period, and did not imply that there were misleading numbers. One can definitely extrapolate on what was unsaid, but it's still guesswork.

I believe China under-reported, but I also don't believe that we'll ever get an accurate account one way or another. Even the 'outside' guesses of 85 million people dying during the Cultural Revolution are based off the estimates from a UN observer who wasn't allowed to see much. Last night, I read about UK scientists telling Johnson that virus victims in China were 15-40 times more than reported. That's a pretty big range of guessing...
Last edited: Monday at 12:05 AM

Thats because that UK scientist was paid to exaggerate the info to add fear.

Remember, NEVER LET A GOOD CRISIS GO TO WASTE.
You must log in or register to reply here.
Share:
Link
Top Bottom