Here's a video of Dr. Campbell more or less confirming everything I'd been saying since January, along with a nice timeline of events. His frustration with the WHO is palpable.

Can't sleep, but just saw this report. I also saw yesterday that the forum lost someone to this disease. Now the US has protests, but this pandemic is far from over. Here, we have confirmation of what was a pretty obvious likelihood. The spread of this disease was probably preventable. Lives didn't need to be lost on the scale they have been.

China withheld data on coronavirus from WHO, recordings reveal

Thats why we need to hurry up on Monster Island

This story has kind of the same feeling as when the CIA declassifies old files decades after they were relevant. MSM is finally allowed to say some of the things that were obvious to everyone months ago.

In 2050, evidence will emerge that Jeffrey Epstein didn't kill himself

And Osame Bin Laden died a long time before 9-11

humon said:
MSM is finally allowed to say some of the things that were obvious to everyone months ago.
Click to expand...

Not because its allowed, its that the information is deemed irrelevant for the sheeple thats why it is given. If the sheep no longer bothers what the truth is then things that are considered conspiratorial are handed out, because the sheep will not bother protesting or revolting that they've been duped for a long time.

Aldous Huxley was right about this in the Brave New World that constant barrage of non-sensical enternmainent can tranquilize the masses.

But whats happening right now is that the sherp begs for the problem(PLANdemic) to just simply go away so they can get back to their comfort zone.

If World War 3 errupts, people will beg for a savior to come which the Bible predicted. But it will not be Jesus Christ coming to save them.
Last edited: Yesterday at 12:27 AM

I don't think the article I posted is a sheeple situation. Governments are already working on punishments for it. Many, many, many people believed China covered it up. There was never a worldwide outcry that China didn't cover anything up.

What it is is proof that those of us who thought so were right. And The Communist Party of China doesn't think of sheeple in the way that the Western mind does. Here, it doesn't matter if someone believes your lie or not. It's just if they act like they believe your lie. The Panama Papers were out on social media for days before the CPC censored that news. Everyone knows. The CPC knows that everyone knows. But nothing came of it, so that's all that matters.

There are no such things as poll numbers or approval ratings here. You can hate the gov't and think everything it says is a lie, and that's fine. Just keep it to yourself, and you'll be fine. They know a significant portion of the population doesn't trust them, but they don't care as long as that portion doesn't do anything about it. It's very different than say... a leader lies for months and years and public opinion polls shows that there's an upswing in normal citizens believing that lie. Here, it doesn't matter. So, no. The 'sheeple' concept isn't really how they think, here. Believing or not doesn't matter.

Coronavirus got out of Wuhan for 2 reasons:

1st: An authoritative blame culture makes people hide things from their bosses. In Wuhan, it was just selfishness and fear of the local authorities. China still believes in luck. So, they took gamble that the virus would burn out before anyone thought badly of them.

2nd: Face. "It's better to die than lose face." The CPC projects stability, but nature doesn't conform. They killed all the snakes and many other species during the Cultural Revolution in an attempt to control nature. It doesn't work with a virus that local gov't was covering up. They'd let the world in an attempt to preserve Face. (I'll also add here that Face and Integrity is not at all the same thing. You can lie to a room about your great accomplishment, and as long as no one calls you out, you gain Face. If someone does call you out, and you yell louder than them, you maintain Face. Fact-checking doesn't exist in a world of Face. It's all about the illusion of consensus, even if everyone knows its an illusion.)

While this news verifies that China has too much control over the WHO, it's has nothing to do with you. China doesn't give a crap if you die or trust them. All they care about is that other UN delegates don't call out their delegate on the floor.

Ah, here's the meme I was looking for: 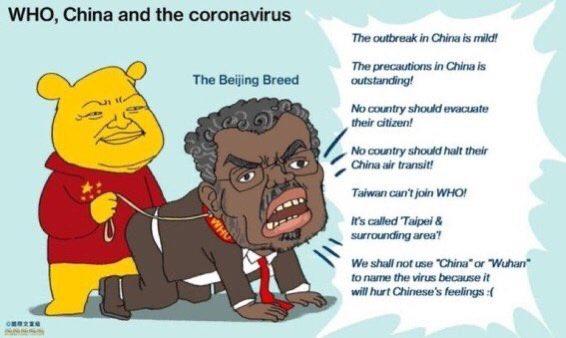