They beat Jesus with this


It's definitely more of a sculpture than a usable piece. If art's supposed to mean something, this probably means I'm a sad, adult-oriented clown 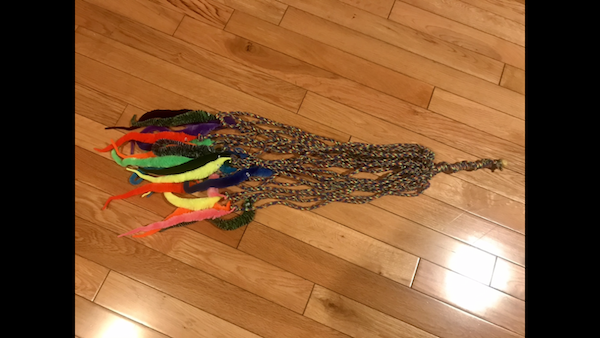 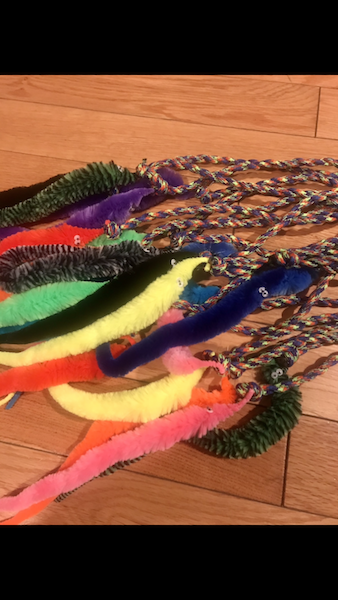 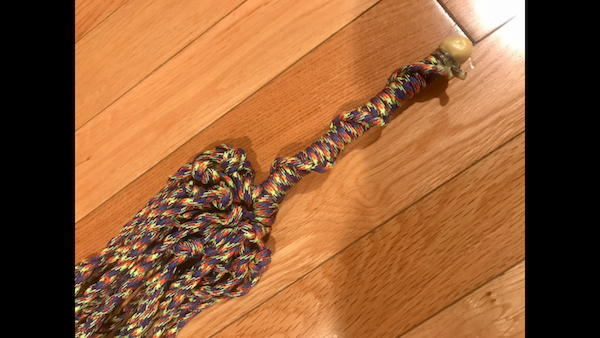 How to talk to short people 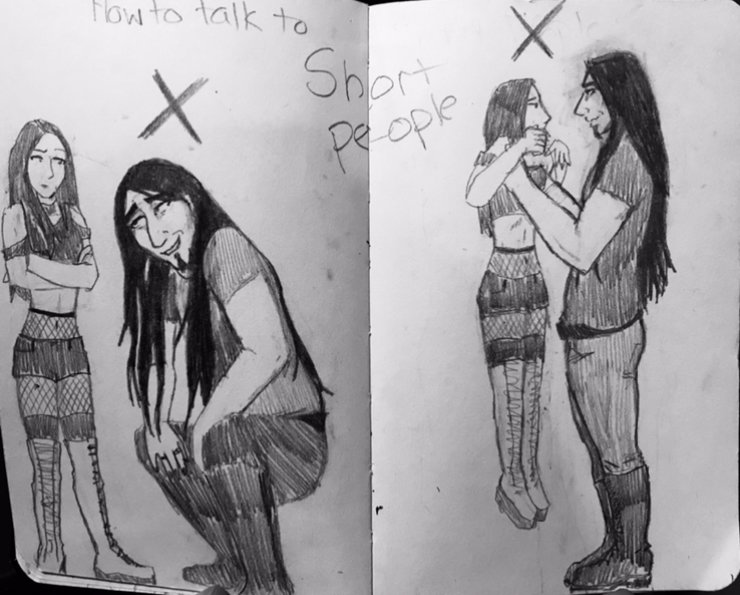 "Guys live like this and don't see any problem"

I never draw backgrounds or environments so I'm gonna do a couple of places I've described. I'm not trying to shade it right or be all sophisticated with perspective, just ~d e p i c t~ a space and the things in it. 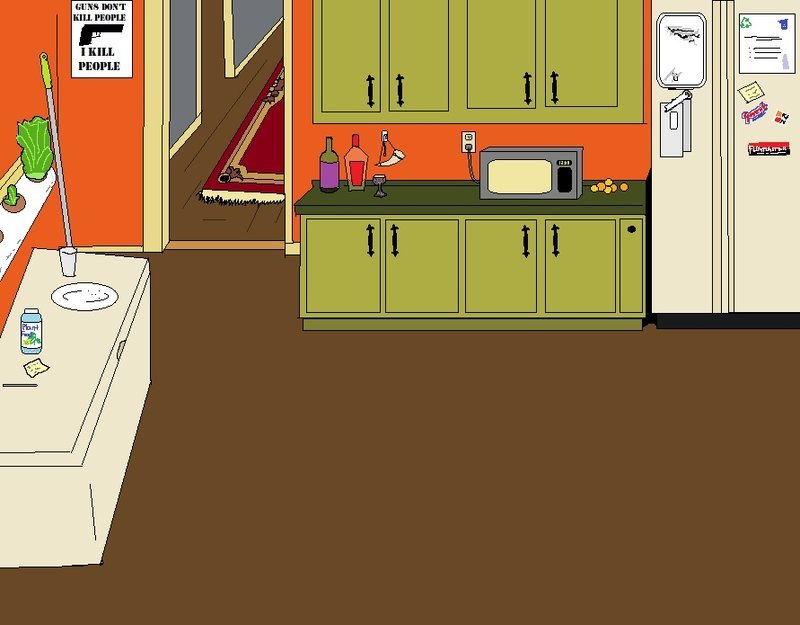 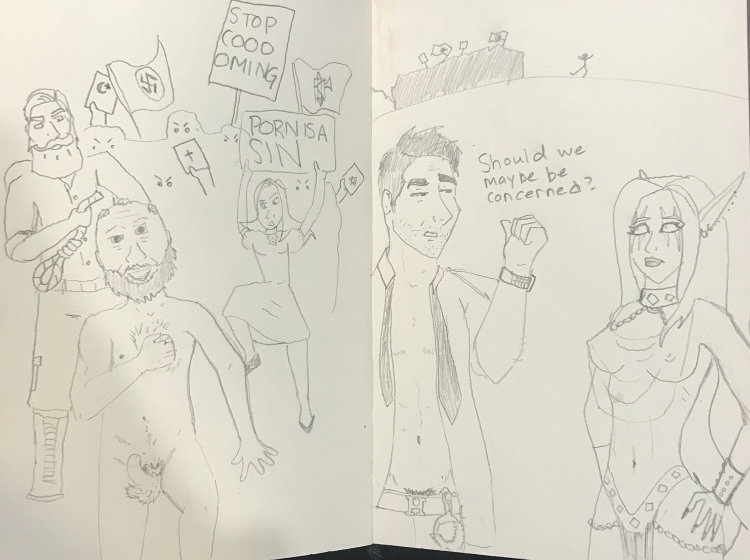 Of all the ways to represent the smut community, a daddy dom and an elf with big tits seemed like the most logical choices
Last edited: Jan 18, 2021

I enjoy seeing pencil work, as one can see the artists "hand" in the work. (unlike a lot of digital work)
Keep 'em coming (regardless of format)! Hopefully the art forum can flourish with enough flourishes.

I wish more people would post their art. Like bruh, it doesn't have to be spectacularly executed, it just has to be a novel idea.

For me, pencil art is good for getting an idea out really fast, but I find my mind works totally different working with lines (pencil art) than it does with colors (digital). When I make a mistake in digital, it's more "uncanny" and it bothers me more, whereas I'm more error-tolerant in pencil drawings. Digital drawings deffo go through a phase in the middle where everything looks like misshapen blobs and body parts floating in space and I'm like "Man, I just should hang myself "

I didn't notice the errors in the drawing (face needs scaled down to match the other face, ear needs moved up and forward), but making it digital made it borderline un-look-at-able at times. 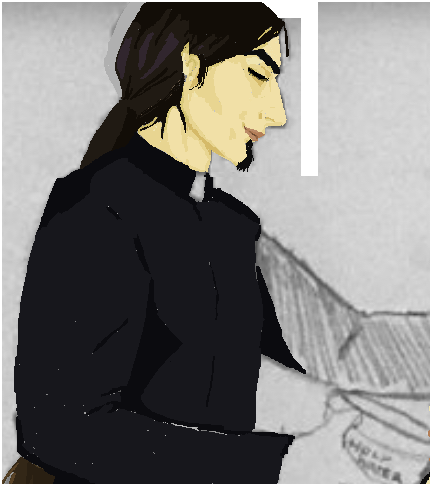 Another shitty meme parody disguised as a clothing “study”. I don’t draw a lot of outerwear.

I have an MS Painting to finish and another idea for one. It’s harder to do more involved art when I’m not home alone as often. 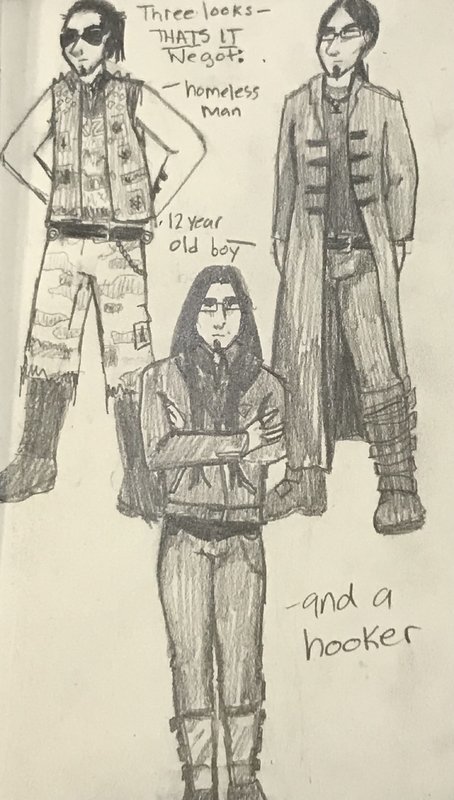 I didn’t know this meme originated from Jenna Marbles and that’s sort of off-brand for me but i don’t care.

“12 yr old boy” - interpreted as vaguely mall-goth with fancy boots and a long coat. The middle-parted ponytail reads geeky and maybe more “innocent” to me.

“Hooker” - interpreted as subtly leather fetish-esque with the tight pants and leather jacket Drawing his thicc-ass legs without making them too feminine is a struggle.

GeneralKathy758 said:
Another shitty meme parody disguised as a clothing “study”. I don’t draw a lot of outerwear.

I have an MS Painting to finish and another idea for one. It’s harder to do more involved art when I’m not home alone as often.

I didn’t know this meme originated from Jenna Marbles and that’s sort of off-brand for me but i don’t care.

“12 yr old boy” - interpreted as vaguely mall-goth with fancy boots and a long coat. The middle-parted ponytail reads geeky and maybe more “innocent” to me.

“Hooker” - interpreted as subtly leather fetish-esque with the tight pants and leather jacket Drawing his thicc-ass legs without making them too feminine is a struggle.
Click to expand...

I relate way too much to the 12 year old boy. Cheap ass mall goth was my 'look', I wanted to be Neo and thought that was original 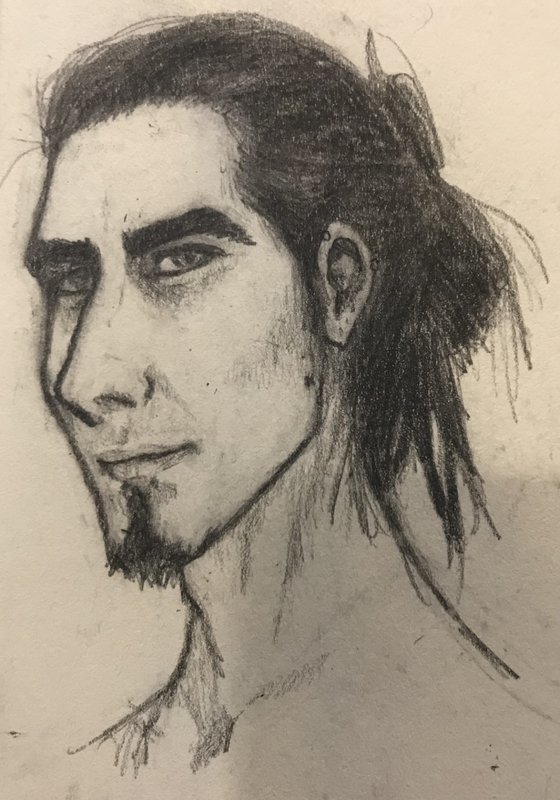 The original version was like 95% but bothered me for some reasons and I think I fixed them all for now. I think the reason, apart from the perspective, is I normally give him a sort of exaggerated mid-face (nose, cheekbones) and the sharpness of his angles in the toonier style but the exaggeration doesn’t translate well to a more realistic style so I made his forehead/brow and jaw/chin a bit heavier. The hairstyle looks improved and more slicked back, and the bun is more detailed. This version succeeds better than the previous at his features being a mix of sinister and cute. 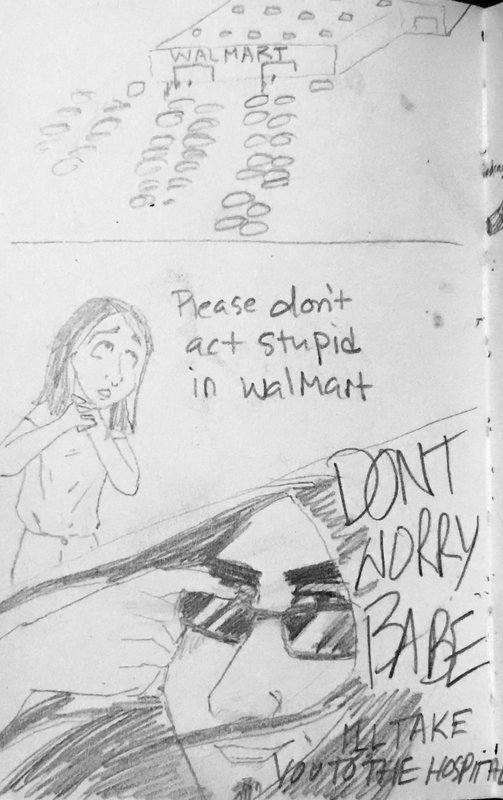 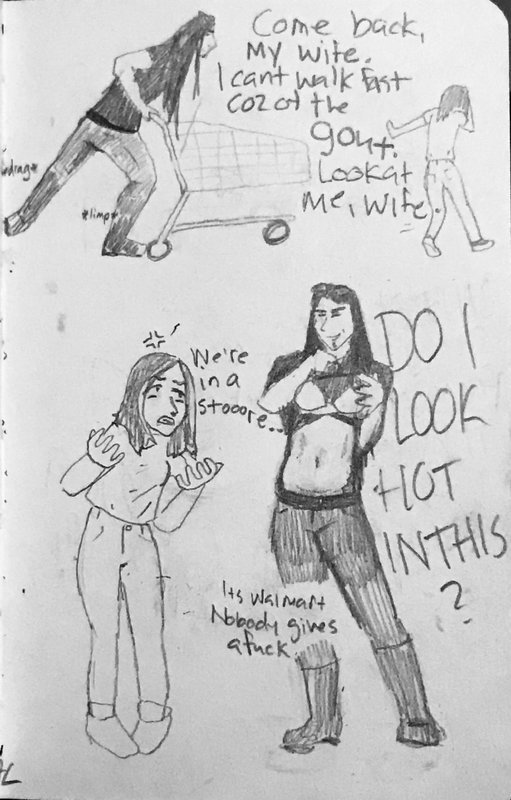 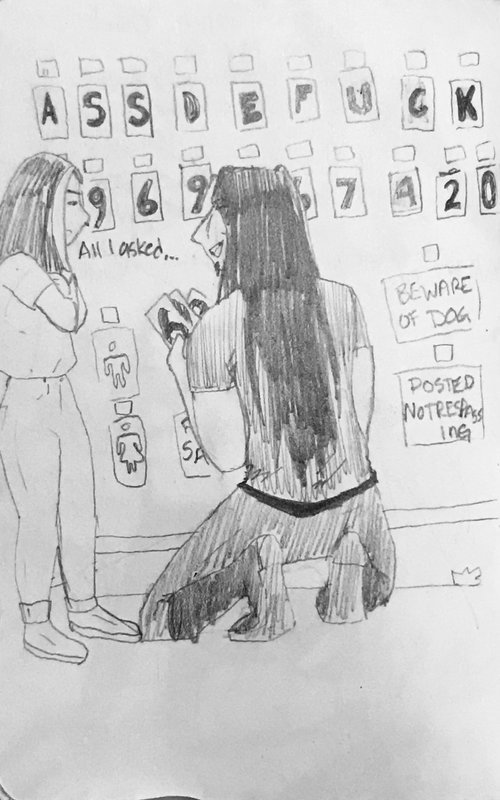 This is not my art, and as such it is that much more important to everyone. Make art, even if you think it’s bad and even if it’s objectively bad. Who gives a fuck. You’re doing something, and anything worth doing is worth doing poorly. 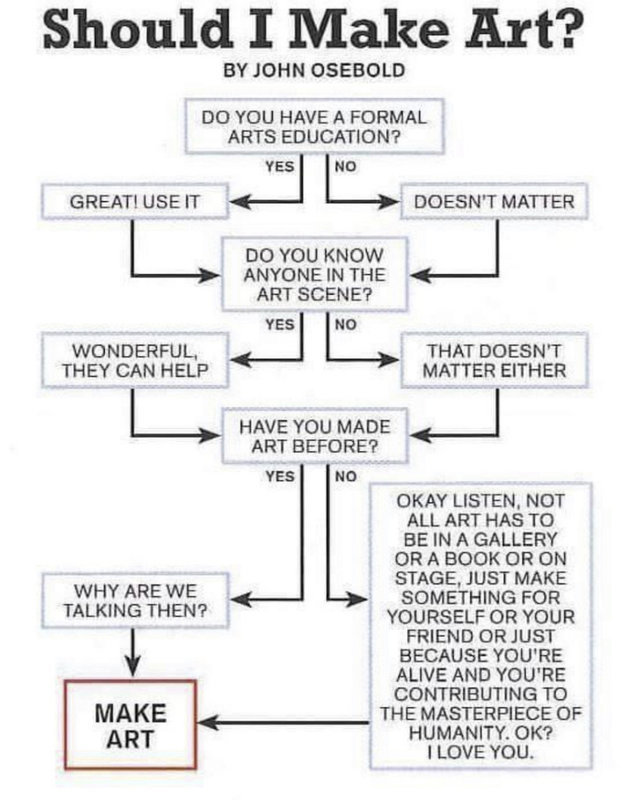 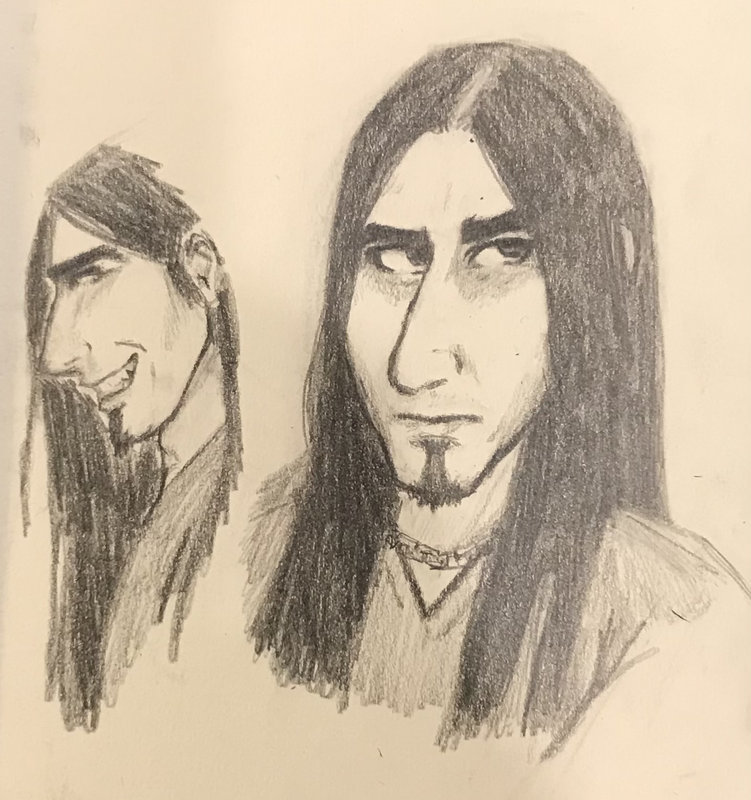 Another low-effort and unfunny “comic” 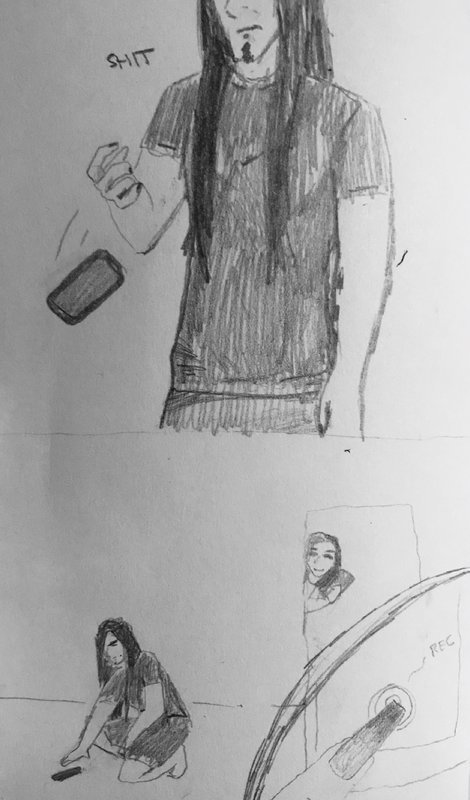 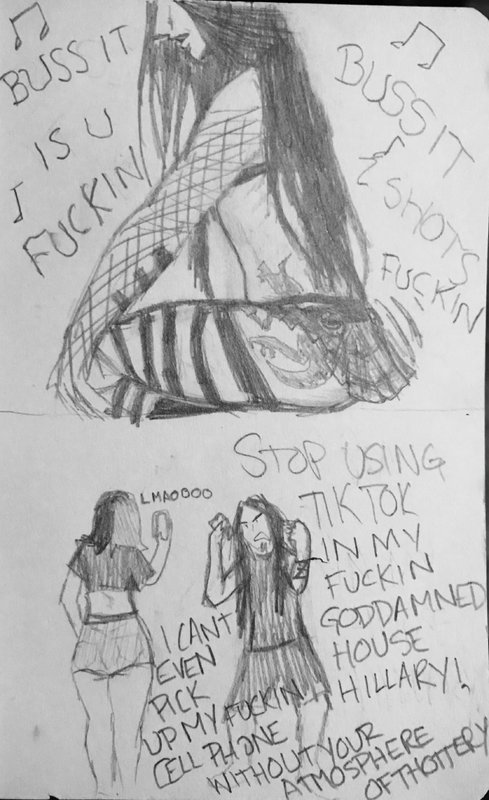 Look up “buss it challenge” if you don’t get it and want to get it. Hillary is a wanna-be e-girl and Jason despises TikTok, but my characters apparently live in the internet so it affects reality. Idk. I’m kind of retarded.
Last edited: Jun 12, 2021

Get stepped on at Femboy Hooters 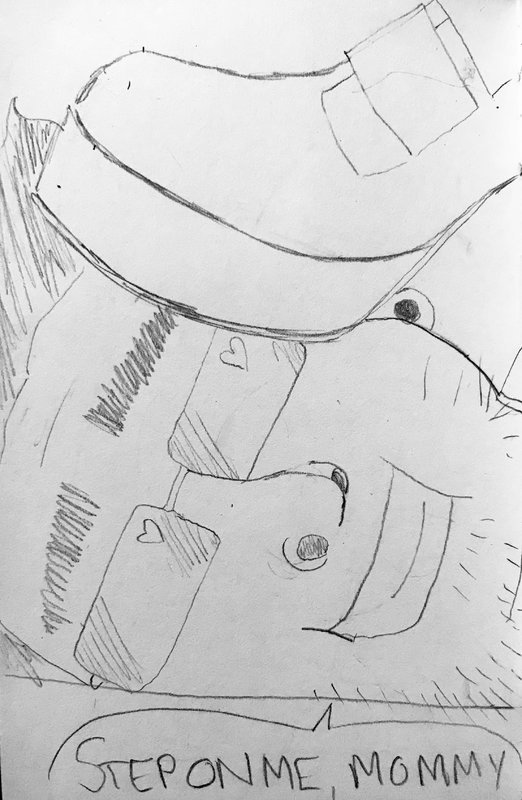 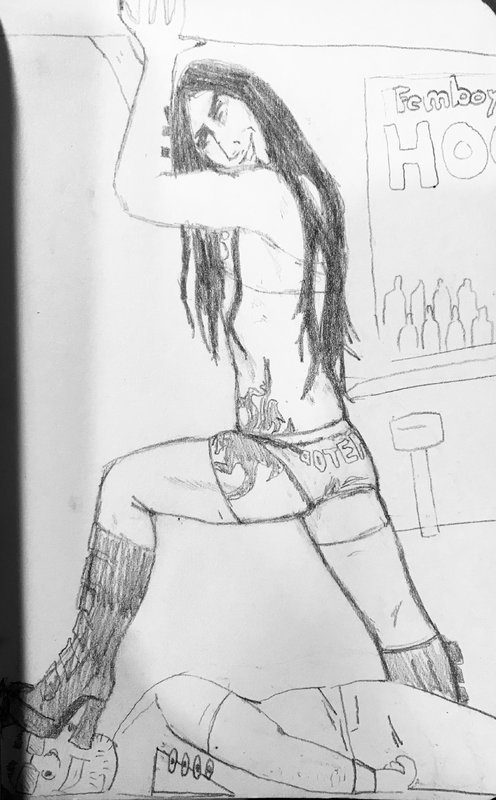 Game Store guy has some really bizarre shit to work through.

“Ever wanna be emasculated by both your whore mother and your emotionally immature father at the same time? It’s really regressive and will fulfill your desire for attention you never got from either.” 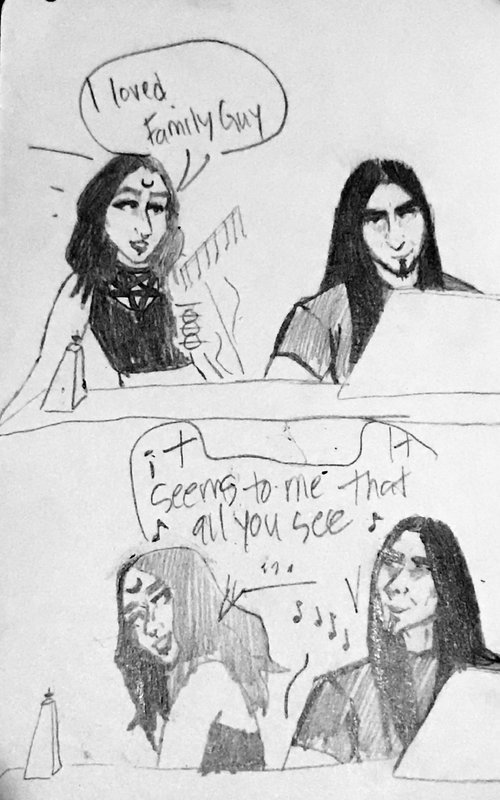 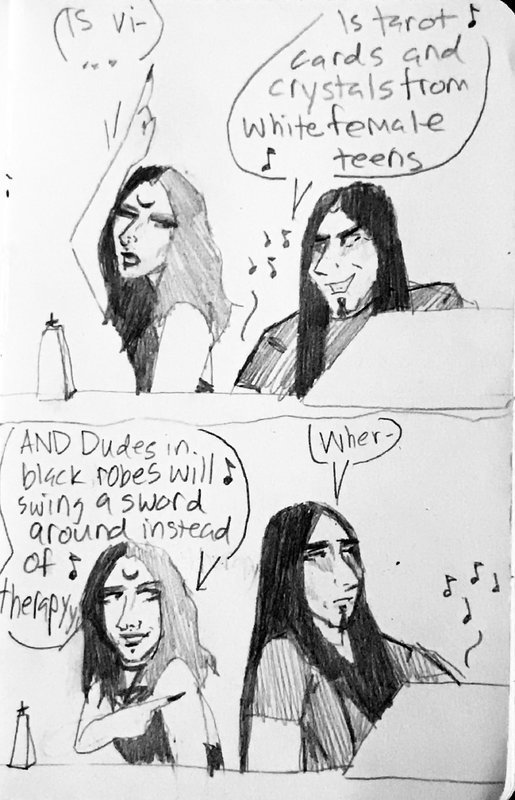 My phone (because I’m too rarted to use a scanner) is doing facial recognition on my drawings.

Me: *takes pic of another shitty drawing*

This isn't art per-se, but an art tutorial introduced me to the abomination that is artbreeder.com. It's like an unholy trifecta of filters, AI, and reverse image search that you can use for many awful things, one of which is making drawings into realistic portraits.

I was trying to translate one of my MSPaints into a portrait and it's sort of meh. It's kind of hard to get "regular person" vibes because it seems like the images it pulls from are heavily biased toward conventionally attractive people - celebrities, photoshopped images, etc. Also, I think because it works algorithmically, it has to be biased toward making things smooth and uniform (e.g. skin), otherwise it will turn a normal imperfection into a jumpscare if the settings are tweaked just a bit too far.

Part of the algorithm is probably like: the AI gets a picture and automatically puts a bunch of invisible dots on the face landmarks and, as you alter a photo, it pulls in photos with very similar landmarks. Because of that, if you mess with the sliders too far in either direction, you will find the photo suddenly jumps into a totally different photo.

My main criticism, which is primarily a "me" thing but it's pretty much in all face-prediction, is that "European features" tend to be strictly either Spanish/Italian or Anglo-Saxon and nothing else. To get the features more Slavic, I basically had to do a lot of searching and found a picture of a Russian (according to the search results) guy with the right age, angle, un-beardness, coloration and kept blending back when the fictional person was too much of a Giado Cortez or a Ryan Jones.

My other criticism is there's no soul patch filter, but I mean...

My more universally-appreciable criticisms are:
- I couldn't find a combination that would give me wide, low cheekbones. You can increase the overall width of the face (which, after a point makes the age increase), you can use a filter to make high cheekbones, but there's not a combination I found that exactly equated to just heavy cheekbones.
- There aren't many mouth filters. You can make the lips bigger, and use the reverse of the filter to make them a bit smaller, but after a point, they start to look really fucked up. There's not really a way to alter the mouth shape without importing other pictures which may affect other parts of the picture you may be totally satisfied with (for example, I'm entirely happy with how the eyes*, eyebrows, nose, and chin ended up).
- I didn't find a filter or setting for changing the jaw angles while leaving the chin alone and not feminizing the whole face.

All these things are probably just a result of beauty standards or something like that. I can't imagine there's a demand for filters that make low cheekbones, overjet top lips/wedge-shaped profiles, or higher jaw angles (for men). I would also include in this "looking Slavic" and "having a soul patch" aren't exactly things that people are jizzing themselves over, unless it's just ironically...like "cheeki breeki sooka blyat hardbass motherland!" or "[in a Guy Fieri voice] I'm Guy Fieri"

*Manipulating the image makes the pupils deformed, but this happened on the tutorial as well so it's probably just a "nature of the beast"

Anyway, I didn't mean to turn this into a rant about beauty standards, but filters and attractiveness algorithms have had a surprisingly significant and pervasive impact on society.

First attempt: looked a lot like thicc, elegant Peter Steele. Not exactly what I wanted, but it's an acceptable first attempt. If I make more, I'll just add them to this post.

Second: Way closer. Instead of merging my drawing with someone of the intended age, right off the bat, I merged it with a boy drawing that had the cheekbones and jaw angle I wanted. It still didn't give me the right vibe, so I merged it slightly with the first attempt. I didn't use the paint from my avatar but it ended up coming out looking like it, which might be a good thing.

Third: Merged the first and second and tweaked it to focus on getting the cheeks right, and making it more masculine like the first pic without looking too rugged.

Fourth: Merged the first and third. I can't decide whether I like the this one or the 3rd better.

Fifth: Merged the 4th and 3rd and I'm fairly happy with this one 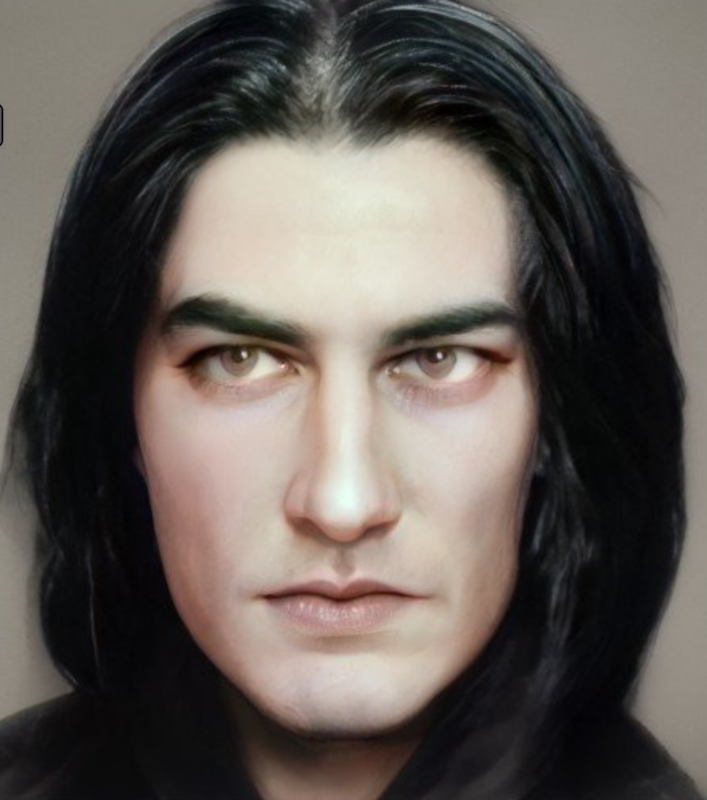 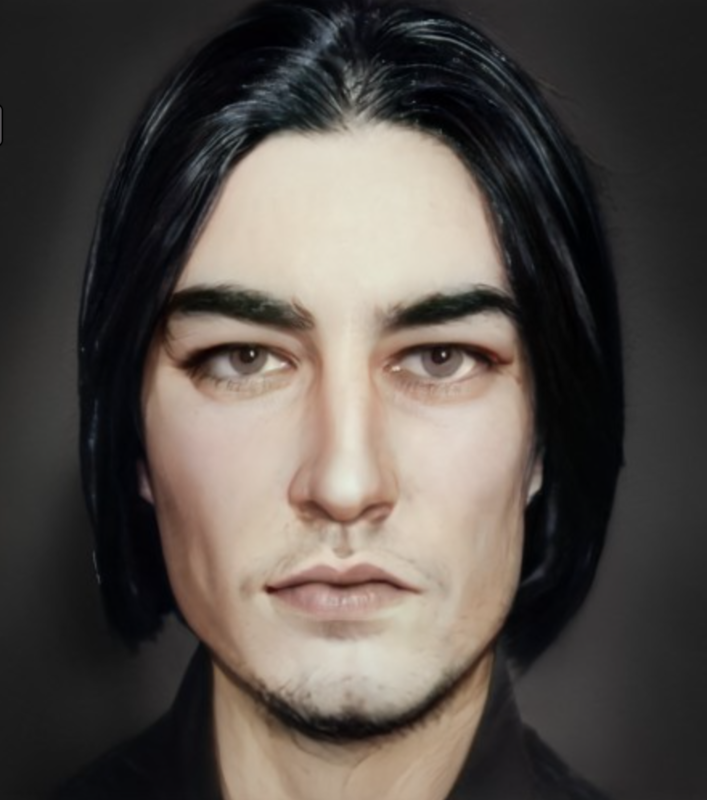 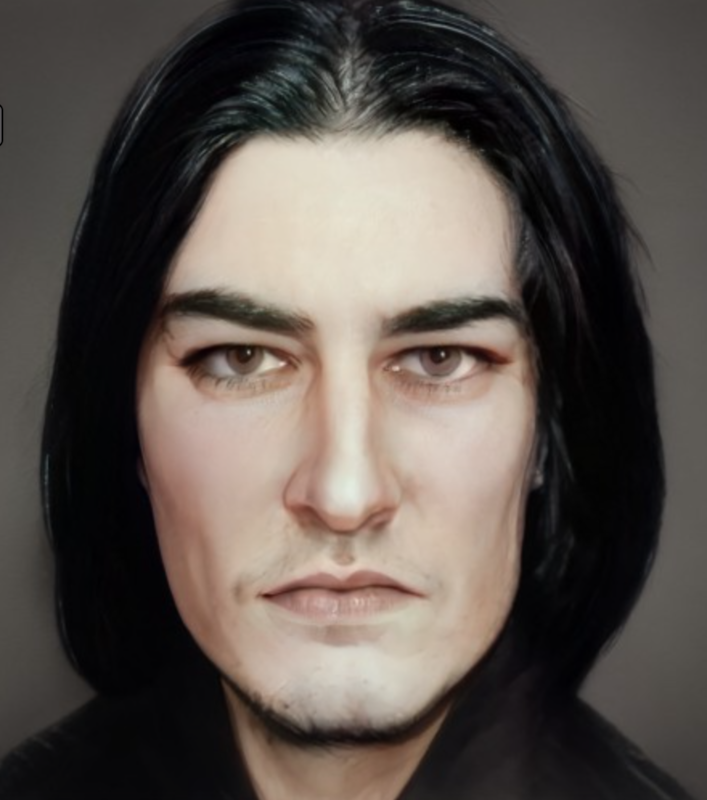 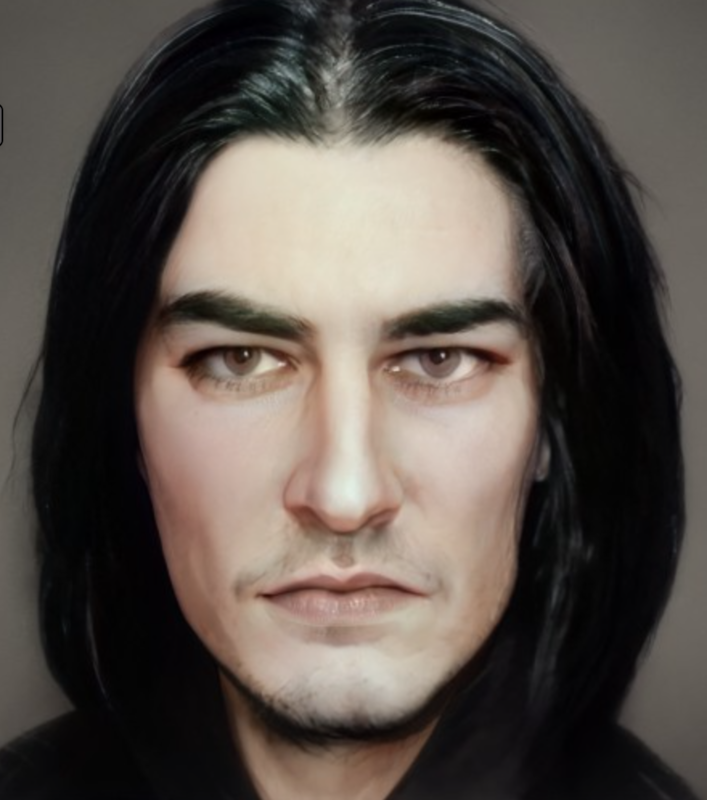 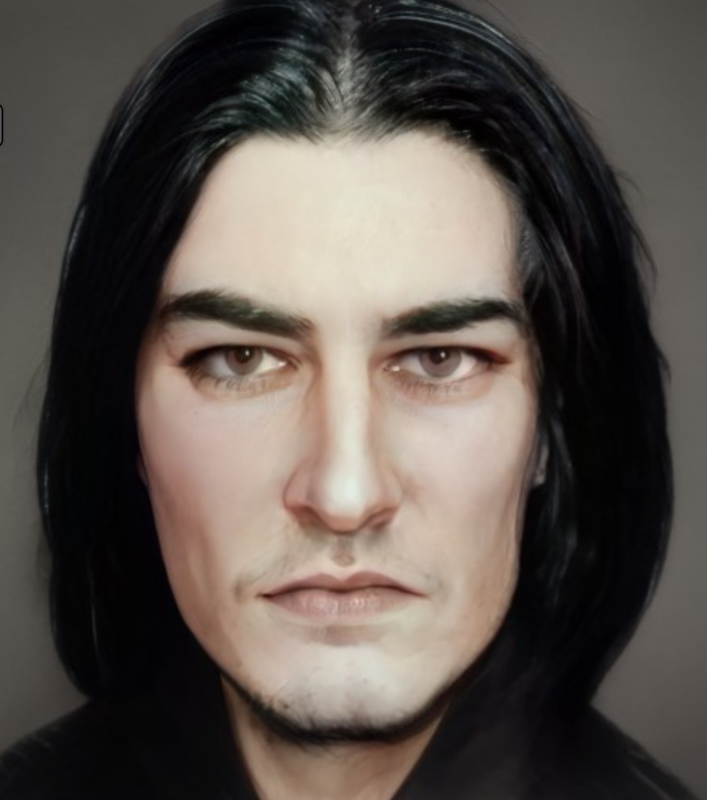 A baphomet demon I found in my sketchbook from a long time ago.

I tried to draw as offensive a gun as possible (within my abilities and patience, cause I don't draw many objects). It's too short, it's too quiet, it's got too many grips, and too many bullets.

Totally gave up on that left hand and drum mag. Might fix it, idk. 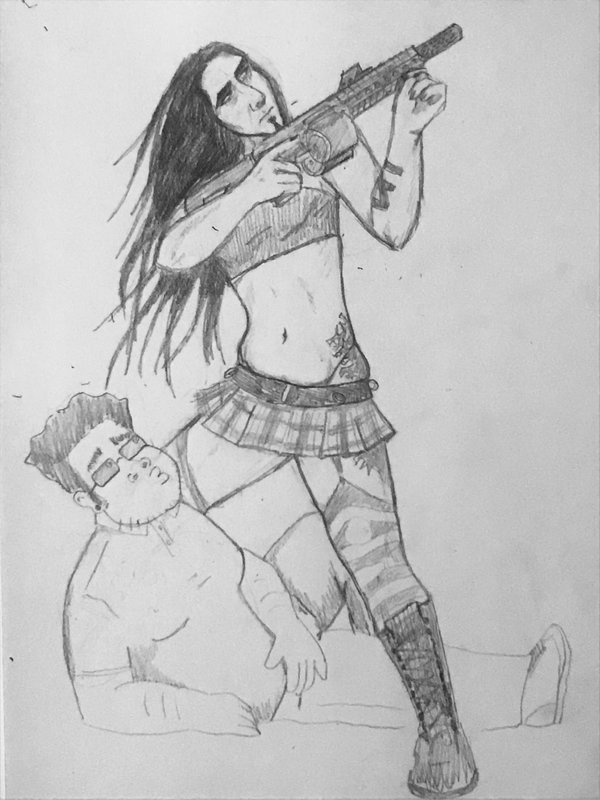