History and Areas of Interest

Events of Note
​
The Origin of Gods
Before the Beast, the common people could ascend, and reach the immortality through the adoration of their people.
Of these people a woman gave birth to two boys, Innocence and Sin who became the first Gods.

The Beast
The Beast was created by the god Sin, to free humanity from the tyranny of the Gods. The Beast is said to be the source of all thaumaturgy.

The Vaal
The first settlers of Wraeclast and the first users of virtue gems, which is what we now call Skill Gems. The Vaal vanished 400 years before the founding of the Eternal Empire.

The Azmeri and the Eternal Empire
Hailing from the Azmerian Mountains, the Azmeri came into contact with the Vaal 900 years before they founded of the Eternal Empire on the ruins of the Vaal.
Although first scared of the power of the Virtue gems and sealing them away. Over the thousand years of the Empire's reign the Gems were discovered and experimented with, eventually being surgically implanted into test subjects and giving birth to the Gemlings.

During this time King Kaom and a Karui war host landed on the The Coast. They attacked and defeated Marceus Lioneye's Eternal Legion, stationed at Lioneye's Watch.

The Cataclysm
(c. 1339) The event that wiped most of civilization from the face of Weaeclast and unleashed the darkness that has twisted the land into it's present state. 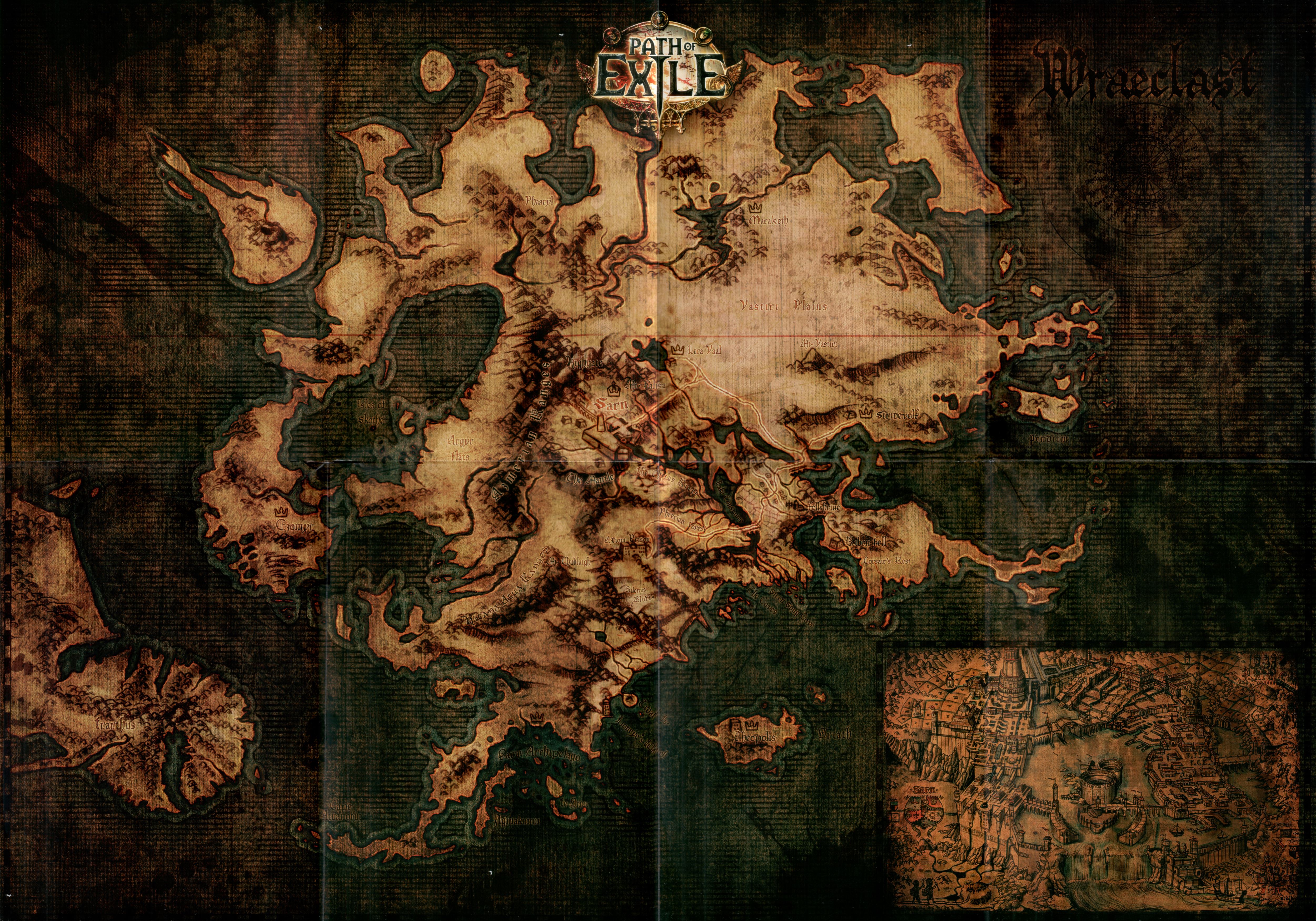 Other Locations
​
Karui Fortress
This fortress was the first and grandest of the Karui settlements during their invasion of Wraeclast and destruction of the imperial presence on the land. Like everything else, the Karui were decimated by the cataclysm and now only ruins are left behind.

Corsair's Rest and the Eastern Peninsula
Since the cataclysm, this entire region and sea to the south has been covered by a thick fog that is said to rob you of both your mind and your flesh. Turning you into a mindless skeleton.

Riben Fell
According to records, this place used to be a bustling city, but since the Cataclysm the fog to the East and rumors of a heart of darkness that twisted the very plants and buildings into monsters.

Stridevolf
An large mountain fortress. It is very isolated even before the cataclysm and few have ventured to find out what has happened to it. None have returned.

Maraketh
A once vast trading city built on the riverway north of the Vastiri Plains. If Sarn was the political capital of the Eternal Empire Then Maraketh was the trade capital. Due to this location on the river, some exploration ships have reached Maraketh from Oriath and reported it deserted and picked clean from what they could tell.

Kauri Archipelago
Once the home of an indigenous people during the time of the Eternal Empire. It is now said to be home to man-eating harpies. Viscous birds that have features like human women. Any man or beast, by land or sea that gets too close is carried off by these twisted beasts back to their nests to be consumed.

Czomyr
On the far western cost of Wraeclast, Czomyr is a far removed from the rest of the Continent and has managed to survive surprisingly well though the Cataclysm. Strong walls around the city and across the narrow northern part of the peninsula keep the monsters at bay, while the tough people of the city take care of whatever is left.

Trarthus
The eastern most city of the Great Continent, which was the source of the original settlers of Wraeclast, known as the Vaal. Trarthus and the Great Continent had never been on friendly terms with Wraeclast and Oriath, and since the cataclysm no words have been spoken between the two lands beyond basic trade.