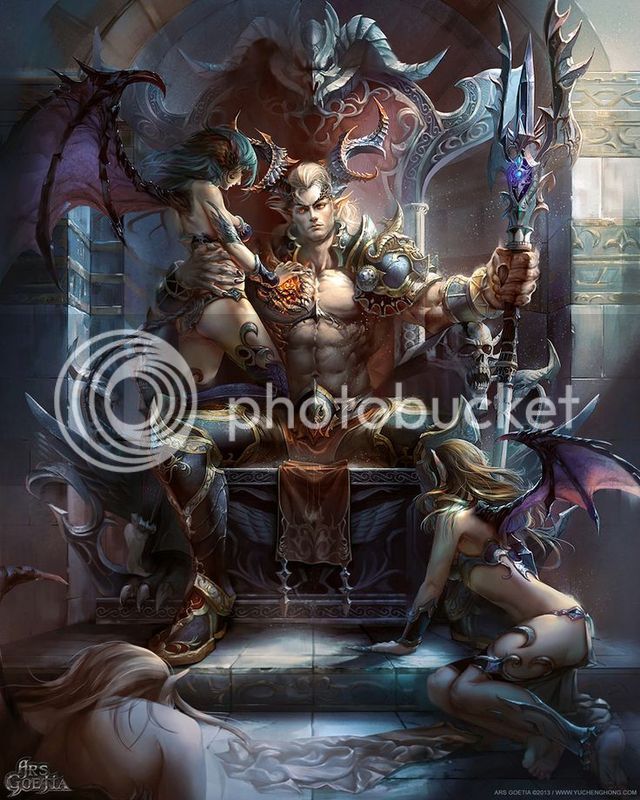 Name:
Xaiver Teraheart
Race:
Demon
Gender:
Male
Sexuality:
Hetrosexual
Age:
6,598
Appearance:
Xaiver fit’s the imagery of a demon Emperor well; standing at a tall height of six and a half feet and still properly fitted with a muscular tone, despite his growing illness. He possesses shoulder length blonde hair and gold eyes, often keeping his facial features well shaven to give him an added youthful age, despite how old he is in basic mortal standards. He is often lightly dress to expose his physique and the only times he is more fully covered along his upper body is when wearing his battle armor. Still, fragments of that metal can be seen upon him when he sits his throne, ensuring all that he is still a capable, magical, warrior king through and through.
Bio:
Xaiver hails from the demonic continent Respain, a land that long ago thrived with life, till internal warfare ravaged it and left it a dying area of death. Many demonic tribes and various species had already went extinct upon those lands; other demons have end up being united either under the Teraheart rule or the growing Cerabuhm tribe. There may have been many more centuries of fighting for decaying resources, if one event didn’t change the entire history for the demon population and the world to come.

A shipwreck was found along the northern banks, close to Teraheart territory. The mortal creatures that came from it were already long gone, but they had left a map that been charting behind of other lands, lands that even Xaiver was unaware of. Even as a wise king, he had never once looked beyond the continent he called home; but if there were other lands it could mean more resources and a chance of a better life than all this continuous struggling for some dying piece of land.

To achieve such an alliance was made with the leaders of the Cerabuhm tribe, but it was a risky one all the same to indulge in peace. Should no land be discovered, if either end up uniting to find that they wasted troops for nothing, than Xaiver was expected to surrender his head as a trophy. Even more so of the risk, both groups were expected to send a representative and in the Teraheart case a random heir was chosen for such an adventure.

In the end, there did appear to be other continents out there, various ones harboring different species that may not took too kindly to the outsiders making home there. Many more wars followed through the centuries involving the united demon force conquering and subjugating various lands. Everyone was given a simple choice; obey or perish. Those that were willing to surrender would still be allowed some positions of importance in their once homeland, but those who straight out resisted would fill the full onslaught of demon invasion that led various conquered races as cannon fodder.

Now, Xaiver makes his dying nest within the centered continent of Andelia, a realm that once belong to various human races of humans, elves, dwarves, and even gnomes. A land that was ripe in technology as far as steamworks and power went. The frail human races resisted to the very end, but now they are all prisoners and urchins beneath their new demonic rulers. It is here that all his descendants and allied Cerabuhm tribal leaders have gathered for the test to see who will carry on the torch of supreme leadership. 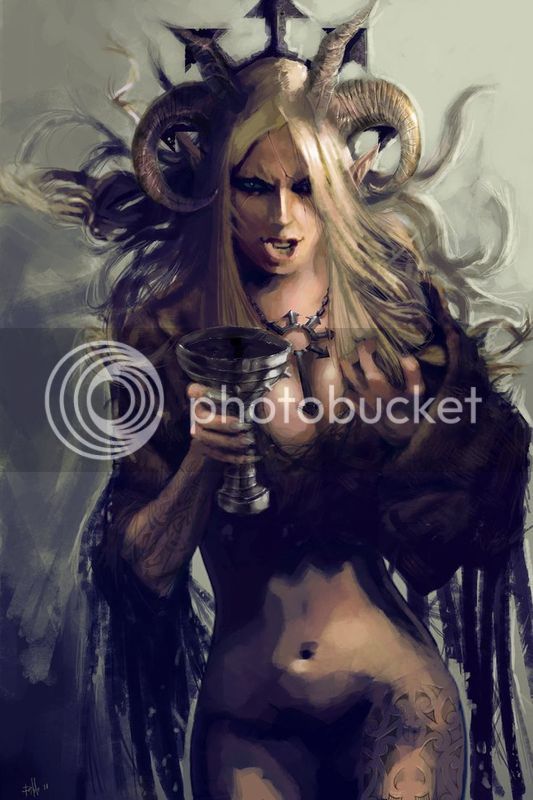 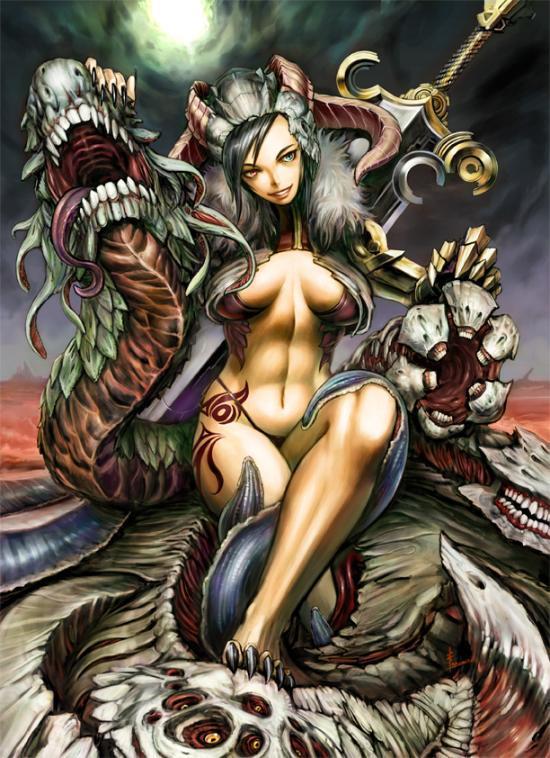 Name:
Neesha The Vile
Race:
Demon
Gender:
Futa
Sexuality:
Homosexual (Females/Futas)
Age:
2,531
Appearance:
Height: 8'0”
Weight: 255lbs of toned muscle.
Hair Color: Ebony
Eye Color: Red/Green
Distinguishing Marks: Her tattoos. Her Horns.
Bio:
Neesha is the offspring between one of the many forged marriages of Teraheart and Cerabuhm; as a result, she has some high aptitude in both magic and physical prowess but compared to the truer bloodlines of those two she is still much weaker in both regards. Given the slow age of bloodline, she did not partake much in the wars within Nividale till her later teens. Andelia was much different through the later span of conquest, engaging within it at adulthood by mortal standards. She aided in the inevitable capture and destruction of many races once forged societies with the beasts that she begun to tame and summon upon that continent.

For the next few decades after the fall of Old Warren she traveled the various realms in search of other beasts to add to her collection. All sorts of monstrosities were claimed from different lands, forced into submission and servitude of her. From giant insects, to basilisks, to mimics, dragons, and all sorts of fiends and creatures. One may name it and chances are it is indeed already in her collection and if not, well, it is only a matter of time she seeks it out and makes it hers. Those of lesser lifespans she tends to breed as for others, she merely seeks a new one out once age or something else takes its life. After all, being a demon is living part of the challenge and hunting and taming beasts isn't anything more than a simple game for her.

As for games, that is how she now makes her living within Old Warren. With it being a former capital of entertainment it holds a wonderful Arena for her to use as a fine exhibit for various other monsters and creatures to be brought within and contested with. She rarely uses her own sources, unless spectators are looking for something more exotic. It is a never ending cycle of commerce for her, aiding in fluctuating trade between races, often paying money, slaves, or other won trinkets or services for certain beasts to go to the arena.
Permissions:
GM Only.
Additional:
She is the Overseer to the Arena and offspring between two powerful demon alliances. (Though she holds no royal titles.)
She is mostly found within the Arena, hosting various games and sports from violent to sexual.
Powers:
Enchantment: Alter Property: She can give various items and even individuals different effects such as making them stronger, heavier, slower, etc for limited time. She often uses this to either empower herself or the beasts under her command.
Conjuration: Summoning: Her other main magic expertise, she has specialized in the art of summoning other worldly creatures. These beasts are ones that she has subjugated over the centuries under her command. It is rare for her to use such, more often resulting to what creatures are brought into the arena currently to entertain the audiences. 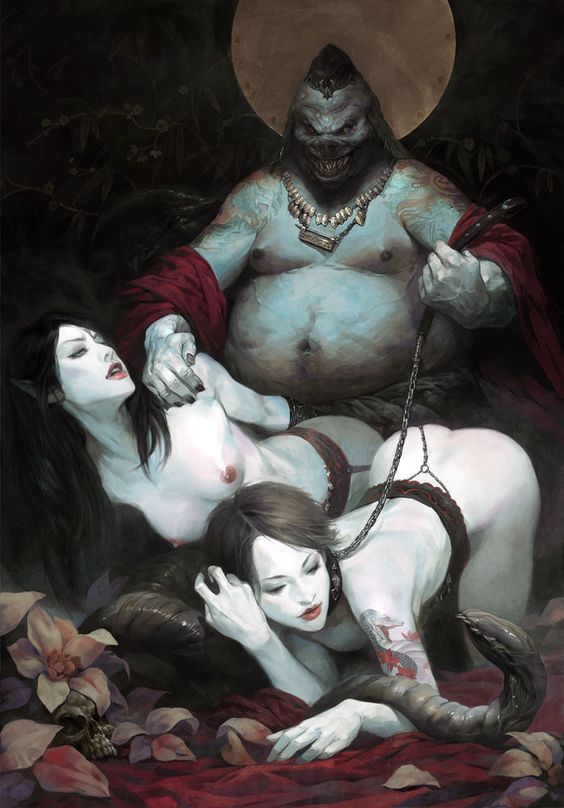 Name:
Aldor the Sloth
Race:
Demon
Gender:
Male
Sexuality:
Bisexual
Age:
1,500 (30s)
Appearance:
Height: 7'5”
Weight: 380lbs of fat.
Hair Color: Bald
Eye Color: Red
Distinguishing Marks: Various tribal tattoos along arms and back is painted in designs.
Bio:
Out of all the demons, Aldor is what many would consider a failure. He holds no true combative capabilities, no magical prowess, and his only talents are his vast memory capabilities and his never ending gluttony; the latter, not so much of a talent. His sheer reasoning of being placed within the city's Cathedral is that, without a doubt, there should be no possible way for him to mess up managing something so simple as maintaining a housing for publicly used slaves. To accommodate to this, lesser races have been employed as guards and watchers of those slaves as well, to see that none may go too far with them.

As his title implies, he also isn't the sort to travel much, usually resting comfortably upon a pile of pillows within the main hallway of the Cathedral right under the desecrated alter. His slave managing is simple, the unruly ones are often kept chained up close by, made sport of by those of hideous or brutish natures, such as himself when he isn't busy violating someone else. The more obedient ones that had learned their place are free to come and go within the Cathedral.
Permissions:
Player Request / GM
Additional:
He has no magical powers.
He is the main brute managing the public slaves at the Cathedral.
It is unknown if he has ever left the Cathedral since being allowed to run/manage it.
Although most public slaves are 'free' to use, more exotic or prettier ones he will charge people 'food' to satisfy his gluttony.
If he read or cared to know how, he could be a valuable living library. Sadly, such is wasted by his sheer laziness, his ability of memory still plays viable for tracking public slaves and who or what used them if retribution is needed.