The initial adventure will begin in the human run kingdom of Cormyr.

You have all heard the rumours, they are the talk of every tavern and guildhall in Cormyr. Adventurers are going missing. Not the entered the caverns of doom and did not return or marched off to confront a dragon and were never heard of again type of missing. Simply vanishing off the face of Faerun without a trace. A paladin's bedroll was found empty in the morning despite two companions being on watch all night. A cleric of Chauntea went to stow her gear in a cabin on a ship sailing the Lake of Dragons and vanished. A half Orc rogue and an Elven ranger disappeared from an inn's room in Eagles Peak.

In all about two dozen adventurers have disappeared. There seems no pattern in race, sex or class, although all have been fairly new to adventuring (low level characters). The area they have gone missing from is fairly extensive, but seems centred on the southern Storm Horn mountains in western Cormyr. Merchants, guilds and the Cormyran authorities have begun to post rewards. In total around 3000 GP is on offer to those who can identify beyond a doubt the cause.

A charter is necessary to adventure as a party in Cormyr. A company name is required. This can be obtained from an officer of the Purple Dragons (a Cormyran army unit) commanding the garrison in Minroe. Minroe is a small mining settlement that lies at the Eastern end of the only reasonably safe established route through the southern Stormhorn mountains. 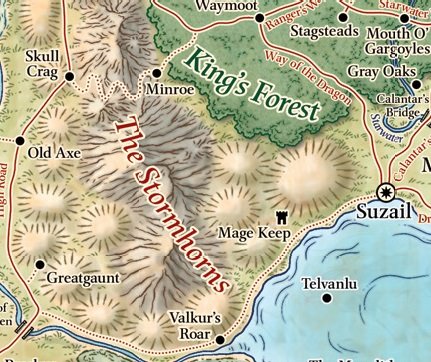 Posted laws of Cormyr at every point of entry.

Putting the letter E after the title makes it sound kind of like a JRPG.

So basically the reason for getting a charter is so that you can bear arms freely? Sounds like Farah will want to register as a party of one just so she can defend herself on the road. Or is there a provision that if you break your peace bond in self defence and then report the incident, you'll be given a new peace bond and set free? Also, how difficult is it to forge or repair a peace bond? Can a cantrip spell do that?

Okay good to know, so I CAN carry weapons that aren't peace-bonded then? for the sake of curiosity I just wanted to clear that up and also how in the world did you get that dice roller a workin?

Oh also I just thought of something. If people want to subvert the peace bond rule they should carry staves and shillelaghs as weapons. You can't peace-bond a walking stick, can you? I wonder if that's why stick-fighting became so popular in Ireland in the first place.

@Hotshot007 you have to edit your post, and at the bottom there's a button to throw dice

Oh sweet! The dice are live too!

Edit: Okay. So you can roll and add dice after? That's neat

Man I am READY to start, can't wait to make some war buddies with the purple dragons.

Hotshot007 said:
Man I am READY to start, can't wait to make some war buddies with the purple dragons.
Click to expand...

I'm with you; I can't wait to get this adventure started!

Best to get on their good side early. There's no protection against unreasonable search and seizure, after all.

How strictly laws are enforced depends on your exact location and who is watching. Peace bonding in Cormyr is largely symbolic and consists of weapons being kept sheathed and tied in with knots to prevent drawing them. Weapons without sheaths are expected to be carried in containers or bags.

Many people use elaborate looking knots which in reality can be released by tugging the right end, and young nobles can be a pain in the ass for duelling at the smallest imagined slight.

Very few shopkeepers or tavern owners would turn down foreign gold unless a member of the authorities was nearby.

Hah. Makes me think of how in China they say corruption is the only reason anything works. When the rules are too oppressive, just ignore them and pay the right people to leave you alone.

As Baelor is exempt from this rule if some prissy noble walks up and starts some "business," there's gonna be trouble trust you me.

Hotshot007 said:
As Baelor is exempt from this rule if some prissy noble walks up and starts some "business," there's gonna be trouble trust you me.
Click to expand...

Good; because I fully expect Clara's charlatan false identity to be some minor noble

CaelumEtTerra said:
Good; because I fully expect Clara's charlatan false identity to be some minor noble
Click to expand...

Tying a weapon in with knots as a peace bond makes me think Lia might try to argue that her bootlace is clearly a peace bond for her hidden dagger if a guard found it.

"No officer. I have no weapons."
Finds daggers
"Oh, those? That's my new fillet knife and the other is my new boning knife. They're not weapons; they're tools"

"What, that dagger? It's totally peace-bonded, look I can't take it out of my boot without undoing my laces!"

It was at this point that Lia's dagger slid out of her boot with the laces still firmly tied.