humon said:
I think we need to get some more precise detail about where the enemies are located, and how the terrain is sloped.
Click to expand...

Groups 1-4 are each six Goblins on foot. Group 5 is six Goblins mounted on wolves. Group 4 is around 150' from you location (the blue circle) where you presently are you are hidden by the ridge line. The ground slopes down from you towards the wagons. Looking over the crest only your heads and shoulders would need to be exposed (hard cover). The wagons have 7 men defending that appear to be Cormyrean engineers armed with crossbows. They are presently holding their fire, presumably waiting for the Goblins to attack. 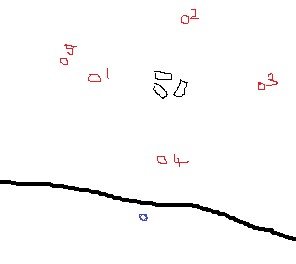 See this is why I wanted the map. Given our positioning it makes more sense for us to attack group 4. If we try to sneak around to attack the wolf-riders, we'll lose the high ground advantage and we'll likely be swarmed by group 1 before we can get to them. There doesn't appear to be any cover between us and group 5, so a stealth approach is not going to work.

humon said:
See this is why I wanted the map. Given our positioning it makes more sense for us to attack group 4. If we try to sneak around to attack the wolf-riders, we'll lose the high ground advantage and we'll likely be swarmed by group 1 before we can get to them. There doesn't appear to be any cover between us and group 5, so a stealth approach is not going to work.
Click to expand...

That high ground advantage means very little unfortunately. At 150ft, we’ve got two (edit: didn’t see Adrian’s sheet had one too) people with a crossbow who can attack at disadvantage. Everyone else will either need to move forward or wait for the goblins to do the same.

Edit: I’d also argue that the goblins are likely distracted by their quarry and so stealth is still an option

Its official, the throw dice thing hates me.

Have you made an offering to RNGesus lately?

Okay, so new plan... we charge group 4. Farah will attack on the right flank, and Baelor should take the left flank. Everyone else just shoot down the middle and try to stay at a higher elevation than the goblins. Given the separation between groups, we should get at least a few rounds to fight them before the other groups can reach us. If we can beat group 4 quickly enough, we have a fighting chance.

It's possible the wolf riders will attack us immediately, in which case we'll have no choice but to stand and fight them, since they'll just ride us down if we try to do anything else. But I'm hoping these wolf riders will not want to risk their own lives too early in the fight when they still have expendable minions to throw at us, and so they'll stay put and command groups 1 and 3 to pincer us. In that case we should focus on group 3, and hope that the engineers behind those wagons can thin out the numbers of groups 1 and 2 a bit while we're fighting. If possible, let's try and engage group 3 within crossbow range of the wagons, so that the engineers can cover our flanks.

If we're lucky, we can drive group 3 into retreat, since they're furthest away from their leadership and they have an easy escape route behind them. Then we can turn around and focus on beating group 1 (group 2 will have to pass within crossbow range of the wagons, which means their numbers should be thinned out before they reach us). If we're unlucky, group 3 will hold the line, group 1 will catch up to us, and then while we're caught between the two groups the wolf-riders seize the right moment to charge in and crush us, gg (although maybe the engineers can disrupt the wolf charge with a well-timed volley). I don't know how else to do this. Fight to the death. For glory and for Rohan.

Okay. I’ve edited my post to better suit the post-map plan of taking on the closest group of goblins. Basically the same on her part; she still needed to get closer to do anything.

Depending on the terrain, stealth checks may be irrelevant. From Andi's description it doesn't seem like there's any cover other than the shape of the hill, as if it's all grass and small rocks. Which means we may have to open the battle from 150' away. Depending on whether the hill counts as difficult terrain or not, it will take between 3 and 5 rounds to engage the enemy in melee. At least under this circumstance it makes sense for Baelor to open with his crossbow: Round 1 double move 60'; Round 2 move 30', fire a shot, and drop the crossbow; Round 3 charge action while drawing sword to cover the remaining 60' and attack. Farah would just double-move twice and either charge on the third round, or simple move-and-attack. Everyone else should fan out in a line and move and attack each round, if they have a sufficiently-ranged attack; otherwise double-move on round 1 and on round 2 move within 60' and attack.

I’d still argue the goblins are distracted because they’re focused on the caravan. Worst case, Clara fails the stealth check by virtue of all the advantages the goblins may have. As it stands, only Lia and Adrian have ranged weapons that matter at 150ft (Baelor has a hand crossbow which is too short range). Clara attempting to move into position ahead of time in no way prevents the rest of the party from charging in. Regardless of what the rest of the party does, Clara needs to move forward and she’d try to do so in a way that maintains as much of an advantage as the party currently has; which she can only potentially accomplish by stealth.

I'm going to need stealth checks from the party apart from Clara and Adrian at this point. Adrian is certainly going to be seen.

Hey, i have no control over the dice roller thing, just saying, makes it really hard to cheat. My character may have loaded dice, but i do not.

Okay, so now that our stealth checks failed, do we begin combat?

It will take he Goblins on foot two turns to reach the spot where Adrian currently is, if he remains there and three to reach the rest of the party on the crest. The two wolf riders if they keep to their course would reach the ridge about sixty feet to your left in three turns.

The Goblins charging the wagons will take three turns to reach them also. Four wolf riders including the chief have not moved yet.

So does that mean the slope is not considered difficult terrain and we can move at full speed? Or does it just level off after 30 feet and the rest is flat ground?

Also, Adrian shouldn't be any further ahead than the rest of us. I thought we were all moving as a unit. At the beginning of round 1 we should all be equal distance from the goblins. Or do you mean to say Adrian won initiative and moved first, and the rest of us still have to give our actions?

Well....I got lost in the swarm of posts and no longer realize what's going on now. Whoops